I know October is over so I'm a little late for breast cancer awareness month, but this is not just an issue that needs to be talked about in October.

Are you 40+ or have a history of breast cancer in your family?  If you answered YES, then GO GET A MAMMOGRAM!!

I am the first to admit I am a big baby about doctors, hospitals and PAIN in general.  Don't even get me started on the dentist!  But I do go to my gyno religiously every year for a pap smear, and now that I am 40, my gyno visit will be followed by a trip to the Imaging Center for a mammogram.

As I said, I am a huge baby and I was very nervous about my first mammo.  Number 1, I was worried it was going to hurt.  And number 2, what if they found something?  But I put on my big girl panties and off I went.  And you know what?  It was nothing!  It literally did not hurt one bit.  A little squeeze, nothing more.  Quick, easy, and painless.  Now, I can't promise you YOUR mammo won't hurt.  Apparently it depends on your breast tissue, size of your breasts, density, etc.  But I am willing to bet it will be a LOT easier than you think or may have heard.

Fast forward 5 days and I receive a letter in the mail stating my results were normal. Woooo hoooo... such relief!

So many people I know have been affected by breast cancer.  I have friends that have gone through chemo, friends that have underwent double mastectomies and reconstructive surgery.  Friends that have passed away.  It scares the HELL out of me.  The unknown is scary.  This disease is terrifying.  But what scares me even more is the thought of not being here for my children.  As my doctor said to me, "You have young kids that need you.  Go now and get this done and save yourself a terrible headache later."  He is so right.  Don't put it off because you're scared or nervous.  Go.  Go now.  If there's a problem, you catch it early and treat it.  You LIVE.

If you've already had your mammogram this year, congratulations!  If you've been waiting to make that appointment, do it today.  Put on those big girl panties and get it done ladies! 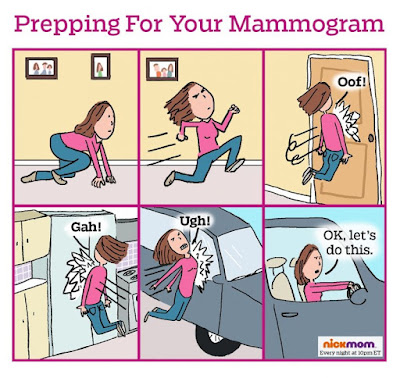