In case you were wondering...

Let's just get into it, shall we?
The past 3 months have been shit.  My mom broke her arm.  My father in law had a stroke and is still in rehab.  My mother in law was diagnosed with a cancerous brain tumor and is currently receiving chemo and radiation.  My husband's grandmother died (while my mother in law was in the hospital recovering from brain surgery), and 3 weeks later his grandfather died.  We've spent more time at hospitals, rehabs and funerals in the past 3 months than we have in our entire 16 years of marriage.

It's been stressful.  It's still stressful but for the moment, things have settled down.  Or maybe we've just gotten used to the new normal.   Either way, we're doing OK.

So that's the shit.

Now for some good stuff. 😊

We put in a pool!  It's taking forever and it's still not finished, but we're in the home stretch! 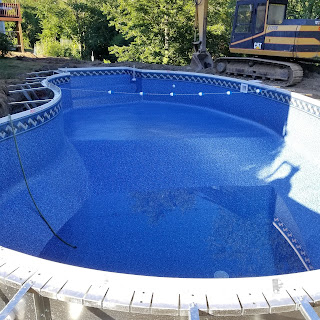 My little guy was born with an accessory tragus (aka ear tag), and his actual tragus was slighly misformed.  The plan has always been to have it removed the summer before he starts school.  Well, today was the day!  He had the accessory tragus removed, and his actual tragus reshaped to match his other ear.  This was his first time being put under anesthesia and his first hospital experience, so although it was a simple surgery, we were nervous!  Everything went well though and Alec did great!  Such a brave guy!  And we are so relieved to have the surgery done and behind us! We are less than 2 weeks away from vacation!!  We are headed to Cape May for a week this year and although I'll miss Maine, I can't wait for some warmer weather and water!

Well friends, that about sums things up.  I hope to be back here a little more often and catch up with you all!  I've got a Friday Favorites post planned, so be sure to stop by!